At the next stop on The Guitar Train, Quirky T will discuss good news for Huey Lewis and The News. So hop aboard! 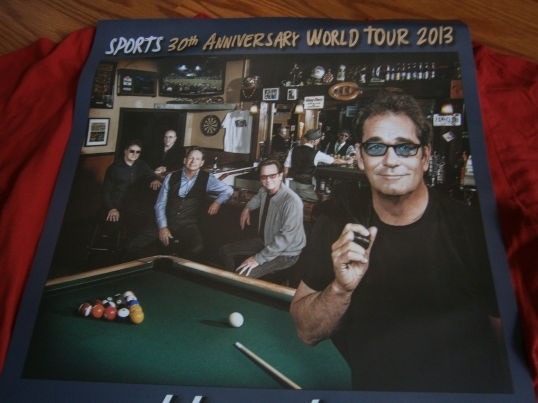 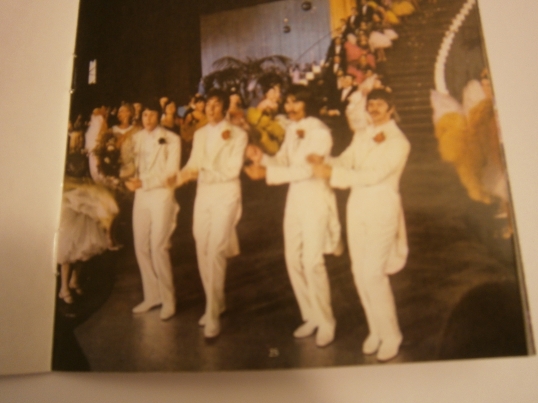 Thank you to everyone who has boarded the Guitar Train in the past. Please stay on board for more musical journeys next year.

Guitar Train passengers, hop on board as Quirky T reaches the last stop on the songs of The Beatles request train. Also, learn the story about the mysterious black cat with the Beatle name.

Running Around to Get Ringo

For the past few Guitar Train stops, Quirky T has been coming up with her dream setlist of songs she would like each Beatle to sing in a special concert. This scenario came to her in a dream where Paul McCartney asked her to request one song of his from each Beatles album. https://guitartrain.wordpress.com/2019/06/27/paul-mccartney-requests-my-song-requests-well-not-really-but-literally-in-my-dream/ Today’s stop contains Ringo Starr songs and my odyssey to get him (in magazine form).

On Saturday, July 6, I found out that the next day’s Sunday newspapers would contain the “Parade” magazine with Ringo Starr on the cover. This magazine is an insert put into every copy of the Sunday newspaper along with the comics, store advertisements, and coupons. So on July 7, Ringo’s 79th birthday, I looked in the Sunday paper which I have delivered to my house for Ringo and he wasn’t there. Every Sunday I get the “Parade” magazine in the newspaper and this day, the day I want it more than ever, it is not included in the paper. So I set out to buy another copy of the newspaper to get the article on Ringo.

I went to a local Dunkin’ Donuts and a bagel shop and neither of them even sold newspapers. I thought maybe they at least sold papers on Sunday but not so. Next I went to the nearest convenience store which definitely sells newspapers. They had the newspaper I needed but none of the huge stack of papers had a copy of the “Parade” magazine. Is someone hoarding Ringo somewhere? My next stop was a supermarket I was reluctant to go to since it is always crowded. I braved the crowds for Ringo. Luckily, I found the newspaper stand very easily. I immediately opened the newspaper to check for Ringo and there he was. Luckily, again, the express cash registers where right there so I quickly purchased the paper. I later found there were actually three copies of “Parade” magazine in the paper I bought. I felt bad that I had two other people’s magazines but then again there were lots of people without Ringo that Sunday. 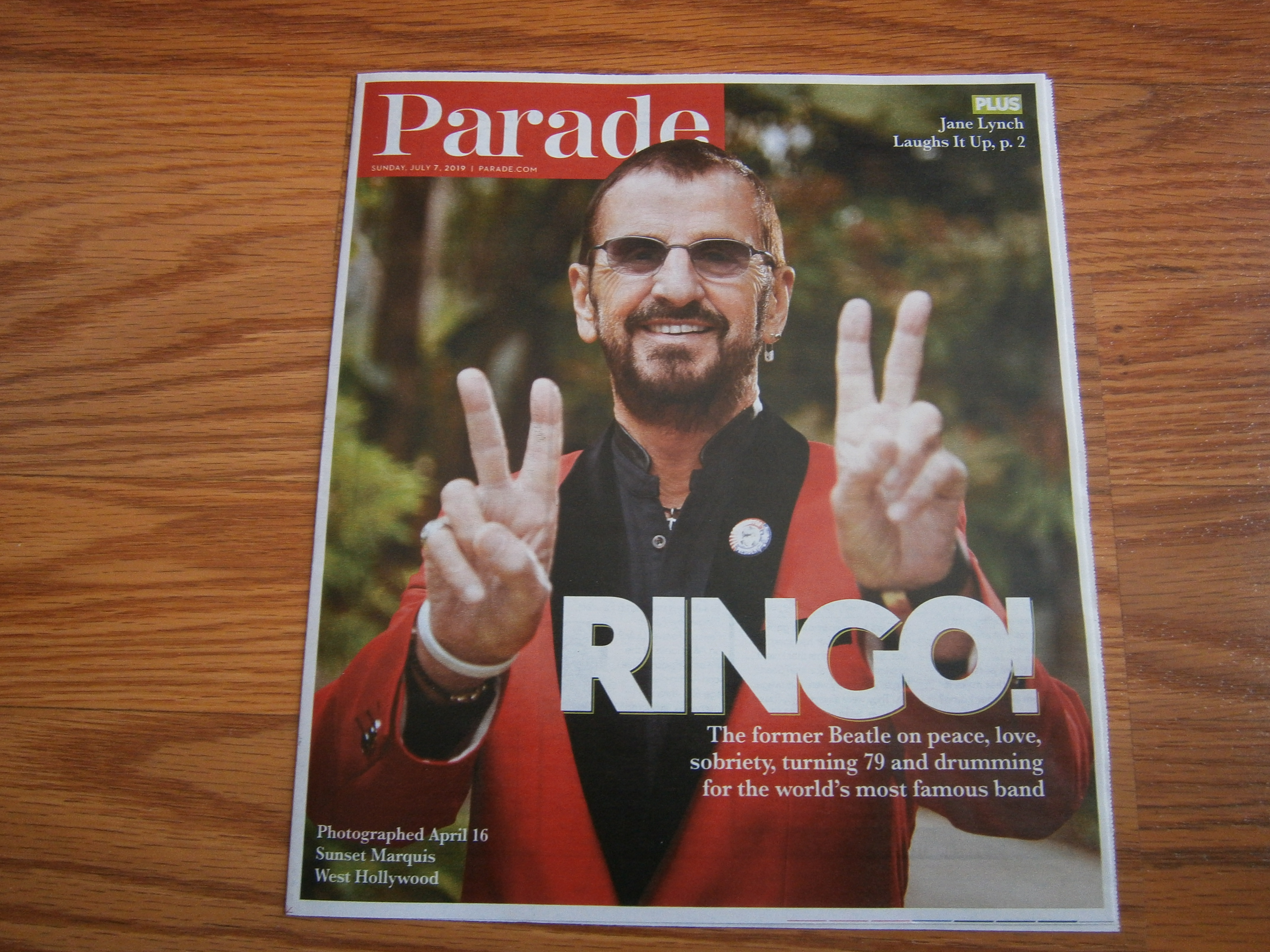 7. With a Little Help From My Friends

Obviously, these are songs which Ringo sang led on. Some of them are cover songs; not originally written by the Beatles but Ringo does a good job on them.

Guitar Train passengers, I know the list is limited but which Beatles songs by Ringo would you request he sing to you?

Like Loading...
Posted in Uncategorized and tagged Act Naturally, Boys, Don't Pass Me By, dreams, Honey Don't, I Wanna Be Your Man, Octopus's Garden, Parade magazine, Paul McCartney, Ringo Starr, song requests, The Beatles, What Goes On, With A Little Help From My Friends, Yellow Submarine

George Harrison In My Dreams

The Guitar Train continues along the track of songs I would request The Beatles to perform for me in the concert of my dreams. I came up with the idea for these posts because of a recent dream I had where Paul McCartney asked me to request one song from each Beatles album and he would perform them for me. Ironically, years before this dream, I had a dream about George Harrison. In that dream, he was in concert performing with a musician I really do not like (and shall remain nameless). That musician was not nice in the dream but George was very nice. The dream was bittersweet. It was good to “see” George Harrison but then sad to be hit again with the fact that he is no longer with us. I was left with the overwhelming feeling that I didn’t appreciate him enough when he was alive. 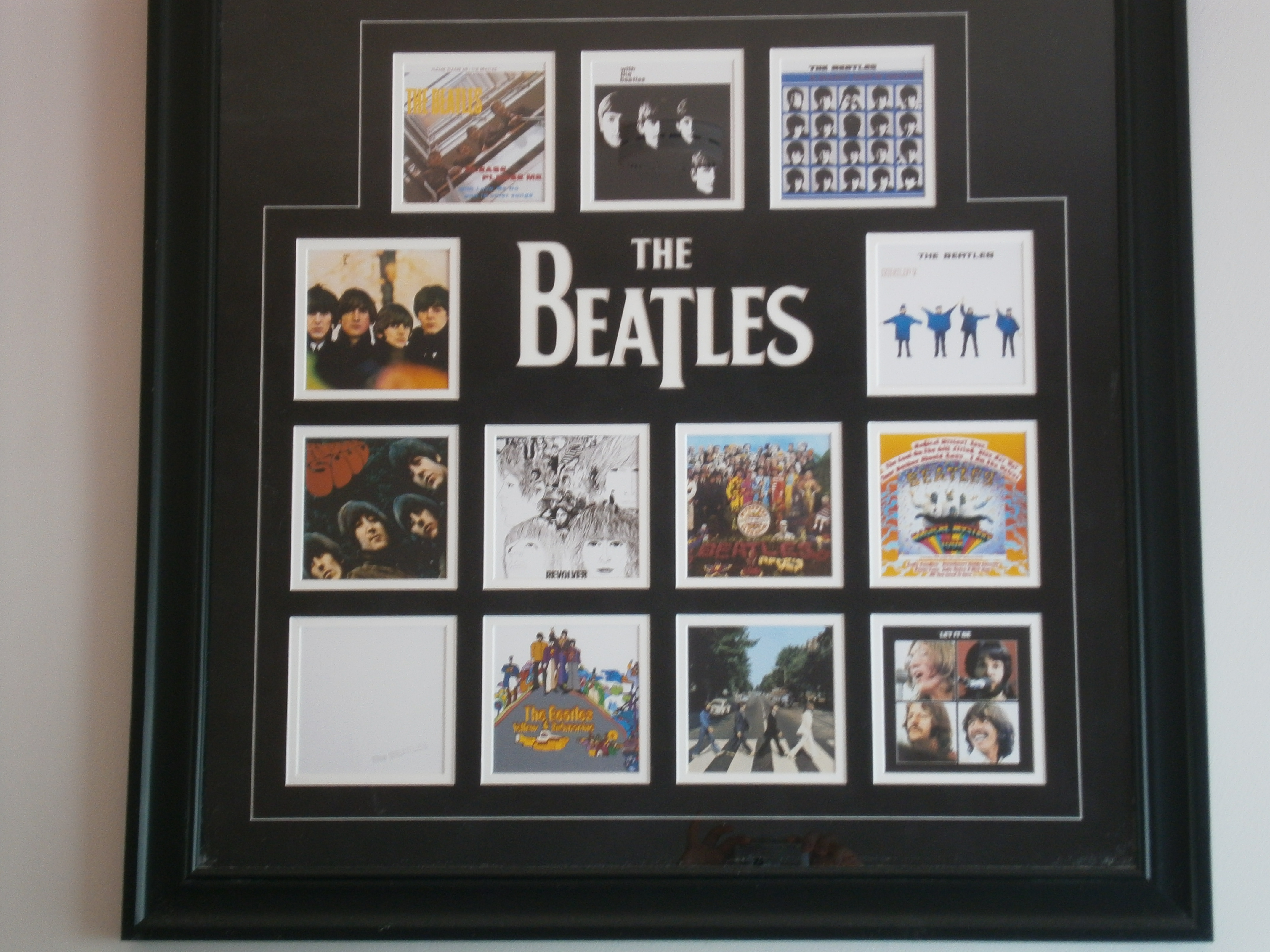 Beatles fans know that George wasn’t given the lead vocal part often or allowed to contribute many of the songs he wrote. (I guess I’m not the only one who didn’t appreciate him enough). As a result, I didn’t have as many songs to choose from as I did for Paul and John. So here are the songs I would request George sing to me in a dream concert.

I would have to ask for a special encore as my favorite George Harrison song was not included in any of The Beatles albums, but released as a B-side of a single. My dream George Harrison concert could not end without hearing him perform “Old Brown Shoe.”

Guitar Train passengers, if you could request one George Harrison song he either wrote and/or sang lead vocals on from each Beatles album, which songs would you pick?

Stay on board for the next stop on the Guitar Train which brings us to Ringo Starr’s Beatles songs.

Like Loading...
Posted in Uncategorized and tagged Blue Jay Way, Do You Wanna Know a Secret, Don't Bother Me, dreams, Everybody's Trying To Be My Baby, For You Blue, George Michael, Here Comes the Sun, I'm Happy Just to Dance with You, If I Needed Someone, It's All Too Much, John Lennon, Old Brown Shoe, Paul McCartney, Savoy Truffle, Taxman, The Beatles, Within You Without You, You Like Me Too Much

In the upcoming months, the Guitar Train will be making stops to continue my series on song performance requests from my favorite musicians. I have already written about my dream song requests for Paul McCartney https://guitartrain.wordpress.com/2019/06/27/paul-mccartney-requests-my-song-requests-well-not-really-but-literally-in-my-dream/ and John Lennon https://guitartrain.wordpress.com/2019/07/31/john-lennon-didnt-take-my-song-requests-in-a-dream-or-in-real-life/ . So coming up is George Harrison and Ringo Starr song requests. I will be including my saga of what I had to go through to get this:

After The Beatles, I will move on to my other favorite musicians – Gloria Estefan, Jon Secada, Phil Collins, Genesis, and Huey Lewis and the News.

So stay on board the Guitar Train for a fantastic fall, the best season of them all!

In last month’s stop on The Guitar Train, I wrote about the dream I had where Paul McCartney asked for my song requests of Beatles songs he would sing to me in a personal concert.  https://guitartrain.wordpress.com/2019/06/27/paul-mccartney-requests-my-song-requests-well-not-really-but-literally-in-my-dream/   So this month, I am applying the same criteria to John Lennon Beatles songs. The criteria is that I can pick one song of his from each of The Beatles albums, no singles.

From everything I have read about John Lennon, I don’t think he would ever ask for song requests or honor them which obviously was his right. But let’s just imagine he did and here are the songs I would choose.

I think this list really illustrates the transformation of John Lennon as a songwriter. He went from simpler songs about romance to more complex songs filled with vivid imagery. It’s a nice song journey to go on and would make an interesting concert.

Guitar Train passengers, if you could have the ultimate dream come true, which John Lennon songs would you like him to sing to you? Remember, it can only be songs from Beatles albums.

Like Loading...
Posted in Uncategorized and tagged Across the Universe, And Your Bird Can Sing, Beatles, Come Together, Eight Days A Week, Help, Hey Bulldog, I Should Have Known Better, I'm So Tired, In My life, It Won't Be Long, John Lennon, Lucy in the Sky with Diamonds, Paul McCartney, personal concert, Please Please Me, song requests, The Beatles